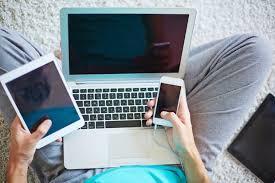 Studies show that teenagers are spending more than one-third of their days using technology, amounting to nearly nine hours on average.

But is this merely an obsession with technology, or is it a technology addiction?

Officially, Internet addiction is not listed in the Diagnostic and Statistical Manual of Mental Disorders (DSM-V), and psychologists are divided on whether it should be included.

Some theorize that social media and interactive games are simply new ways for kids and teenagers to feel connected. Thus, what appears to be excessive use may be “an expression of [kids’] desire to interact with friends in a society that does not allow children as much freedom as earlier generations.”

On the other hand, Stanford university psychiatrist Dr. Anna Lembke says that she has noted a classic pattern of addictive behavior in many compulsive Internet users. Recreational use progresses to daily use, then to consequential use (insomnia, dysfunctional relationships, absences from school or work), and in extreme cases to life-threatening use.

Others agree, pointing to studies showing that Internet use can activate the same reward pathways activated in individuals with substance abuse disorders. Additionally, people who use the Internet excessively seem to build tolerance over time, needing longer technology sessions to experience the same euphoric feeling.

In China, Internet addiction is already labeled as a mental disorder. The United States may soon follow suit. However, psychologists are still debating on whether people are addicted to the Internet itself or to specific online behaviors such as gambling, shopping, video games, and pornography.

Concerns Over Internet Use

Although some argue that kids and teens are harmlessly “overindulging” in technology, others are deeply concerned.

“Side effects” of excessive Internet use include:

And according to a report by Common Sense Media, technology and media use is a “source of tension” in many families. Children report that their parents check devices too much, causing them to feel “unimportant.” Meanwhile, parents struggle with limiting their children’s use of media and technology.

It may not help that schools increasingly use technology too. Young people spend hours of free time staring at device screens, and they’re now spending more and more time working on devices at school as well.

Experts and parents alike voice concern that this cuts down on face-to-face interaction, which could result in poor social skills or even a lack of empathy. There’s also concern over easy access to violent videos and imagery, misleading information, and pornography, as well as the threat of cyberbullying.

We are truly in the era of digital natives, and it’s vital to consider how this will impact future generations. Technology certainly isn’t going to slow, so how can we appropriately manage the time our children and students spend on the Internet?

According to Common Sense Media, the answer is balance. This includes:

These recommendations are more effective than forcefully limiting technology: Research has found that children of “technology limiters” are more likely to engage in problematic behaviors online.

Common Sense Media recommends that parents step away from the devices too—at least while driving, at the dinner table, and during designated family times. The report states, “Parent role-modeling shows kids the behavior and values you want in your home. Kids will be more open and willing participants when the house rules apply to you, too.”

Children with positive “media mentors” are likely to have more self-control when it comes to technology, and it’s much less likely that they will engage in problematic behaviors when they are online.

Technology isn’t going anywhere, and neither is the public’s fascination with all things digital (it’s not just teenagers).

So it’s vital that we find a way to lead healthy, meaningful, and productive lives via a balanced diet of media and technology.

Encourage your children to focus on quality media consumption, single-tasking, and establishing tech-free times and zones. Foster face-to-face interaction by having family dinners or game nights with no screens allowed.

And remember that technology isn’t all bad—for many young people, it’s simply a means of discovery, connection, and creativity.